After getting some much needed sleep with some heavenly pillows, I felt a lot better about being in California. It had been a bit of a rough first day, but overall, so much fun. I couldn’t be more excited for day 2!

We decided to go to Santa Monica Pier. It was a bit cloudy and there was a wind, but nothing us Coloradans can’t handle. It was actually really funny to see people really cold and I was in shorts and sandals. I had a tank top on too. I wasn’t bothered at all. The difference between here and home is that when it’s windy, it’s more often than not a cold wind. Whereas, here, it’s a warm, humid wind. Even more so at the pier because it’s right on the ocean.

For those who don’t know, Santa Monica Pier is the end of Route 66. It starts in 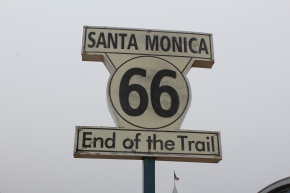 Chicago and goes all the way through the country, and ends in California. When you get to the pier, there’s a huge sign that tells you it’s the end, and once you walk to the end of the pier, you’re over the ocean. In Bobbi’s words, “It’s the furthest west you can go without falling into the ocean.”

On the pier, there are so many different shops and food places and souvenir venders. Many more than needed, but hey, they gotta make money. The first thing we did when we got to the pier was get churros. They were like a foot long and so sugary, it was wonderful. Also very fluffy. Easily, one of the best churros I’ve ever had. Costco is a close second.

There is also a little theme park – Pacific Park. Lily loves the rollercoaster there so we decided to give it a whirl. I would give it a solid 6 out of 10. 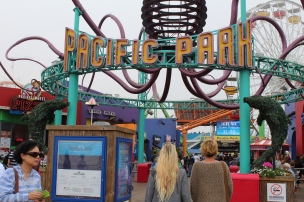 It wasn’t really a huge rollercoaster, but it wasn’t the mini ones for kids at fairs. It was a medium. The ride itself, wasn’t bad at all. I personally thought the end was much better than the beginning. It had one of those fast – though small – drops that make your stomach do weird things. I’ve always liked that feeling, so solid 6 to that coaster.

I’m a cheesy tourist type and love to have little souvenirs from everywhere I go. Or just

things to hold onto that remind me of that time I went to that place and did that thing. Though, with an uncommon name like Veronica, it’s hard to find things with my name on it. But apparently names like Viviana, Guadalupe, and Juan Pablo are all VERY common names. As shown by the shell bottle. Not going to lie, I was a little disappointed, but I ended up getting a small turtle made out of shells with glasses and a hat. I was satisfied.

We walked to the end of the pier and hung out there for a bit, looking at the ocean, enjoying some solid cotton candy. We took some pictures, many of which, my eyes closed and hair frizzy. Next thing you know, there’s a seal! It was just swimming around below us, definitely begging for attention and showing off. We were mesmerized for a quite some time. But we quickly came out of it when this stupid siren thing went off every 3 minutes.

As we made our way back to the end of the pier, we went into Bubba Gump. 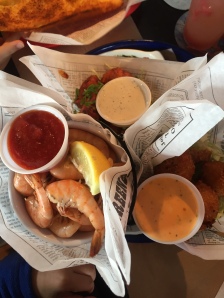 I’d never been to or heard of Bubba Gump before. They had a little shop as an extension of the restaurant. There was a stuffed animal shrimp magnet that I was very tempted to buy, but I didn’t. It was a long drive back and we hadn’t eaten anything but pure sugar, so we sat down and ordered some garlic bread and a sampler appetizer. They had hush puppies, what they call Peel’N’Eat shrimp, chicken tenders, and chips with a spinach dip. All very good except the chicken tenders, they had a weird sauce that I wasn’t too fond of. I thoroughly enjoyed the restaurant and the vibe that it had. Very cool, I must say.

We drove home and hung out for a little bit before we headed into Hollywood to go to Elijah’s stage reading. None of us had ever been to a stage reading before so we didn’t really know what to expect. But wow, was it amazing. The play was called Looking For Normal. It’s about a man named Roy and his wife Urma and a big change in their lives. Roy is transgender. He finally tells his wife after 25 years of marriage. The play is about how it affected their daughter, Patty Ann, and their son, Wayne – played by Elijah. It’s a heartbreaking yet honest portrayal of the real lives many people in the transgender community experience. I cried like 4 times. It’s based off the book written by Jane Anderson and after that play, I most definitely want to read it. Everyone on that stage was so talented. That doesn’t even seem like enough to describe them, but they are. It was a phenomenal show, even if it was only a staged read through.

On our way home, we stopped by a Walmart so I could get some makeup remover wipes because I had forgotten to pack mine. Lily went in with me and it was super weird. We got to the cosmetic department and everything was locked behind glass, like how they do with game consoles and expensive things. I asked someone to get me a package of wipes and when she did, she put it in a plastic box for me to take to the counter. It was all very weird, but I got my wipes and that’s all I wanted.

We finally got home at about 11:30 or so and Bobbi made a salad. I had some and then off to bed I went. Day 2 was a lot of fun and I can’t even put into words how happy I am to be here.

Thanks to my mom for being so wonderful and allowing me to make this trip. She’s my rock and my best friend. I’m the luckiest girl.