Since being here, one of my favorite things to do when I wake up is sit outside and write my blog posts. It’s just nice to be outside while I’m writing. It helps me think and it feels good to not be in a house.

Lily had school so we had to take her to her class – she only had to go for an hour or so. So, Bobbi and I went to a little shopping/food plaza type place.

There, we had cupcakes from Sweet Arlene’s, which is a company that has won Cupcake Wars – the show on the Food Network – 3 times! I had a red velvet cupcake because you can never go wrong with those and it was heaven on earth, I swear. The cake was so moist and fluffy, not crumbly at all. The cream cheese frosting was so sweet and fit so nicely with the cupcake. If I could eat one of those cupcakes every day for the rest of my life and I would be happy.

After getting cupcakes, we walked around and just window shopped in all the 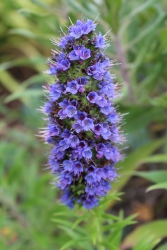 different places that were there. It was very flowery so I was taking lots of pictures. On our way back, there was a dog outside a shop! It was so adorable and so lovely. I looked down at it and asked if I could take it’s picture and it just sat down and looked up at me. By far one of the cutest moments.

When we went to go pick up Lily, we were a little early so we went down to this part of the little area that her school was in where there were ducks! I took a few selfies with them. There was a swan there too, and it was curled up on itself, napping. There was also a mom who was sitting on her babies! I am such an animal person so I was having the time of my life.

When Lily was finished, we decided to go to Beverly Hills and see the sign and take a picture because why not. So we drove down and Lily could not figure out 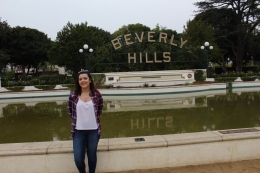 how to work my camera, it was so funny. But, we finally got the picture and I think I look pretty decent. After that, we decided to get some food at an Italian restaurant that they used to go to a lot because Elijah had acting classes near it. I got a salami and provolone croissant sandwich and Lily and Bobbi shared a alfredo linguini. It was so delicious and they had wonderful bread with vinegar and oil. I love food.

When we got back, I got to lay down for a bit before heading to Elijah’s dance class! He teaches 2 hip-hop classes and he let me sit in. I had a lot of fun watching him teach and watching tiny people dance. I think that’s one of my

favorite things in the world. During his classes, he was so tired because he didn’t have any coffee that day. So me, being the nice person that I am, walked to a Starbucks and got him coffee. Elijah is a talented dude, lemme tell ya. I know a lot of talented people and every time I see them do something they love or something they’re passionate about, it warms my heart. He is one of the funniest, most down to earth people I’ve met, so it’s cool to see that portrayed in his classes and the way he teaches. Props to you my friend.

After we finished up there, we walked to that same Starbucks and hung out for a little before we got picked up. We just talked about life and various things and then we drove home. Elijah was also very determined to play a new game that they had gotten called Ticket to Ride. It took us forever to get it up and running because we were talking so much but when we did, we yelled at each other and in general a lot because it wasn’t always going the way we wanted it to. We ended up playing 2 games and he won both of them. The first one by a long shot and the second one by 3 damn points. I was hurt, so say the least.

Between games, I made Elijah take the Myers-Briggs personality test so we could see what type he was and we read through all the components that the test lets you read about when you’re done. It took forever but it was cool to see what he related to and what he didn’t. By then it was 3 in the morning and we wanted to play another game. We ended up just playing and staying up for another 2 hours just talking about life and the different components to it. I love deep talks like that with good people because it just makes things so much more wonderful. You get so much insight on a person. I learned a lot about Elijah and he learned a lot about me. Furthering my respect and admiration for him.

My heart and soul is so beyond happy in this state,

I can’t even put it into words. It sucks more than anyone could understand that I have to fly home soon. I wish I could just live here forever. The only thing I could never get over, though, is 3 dollars a gallon for gas.