Day 4 was one of my favorite days. Bobbi and I went to The Ronald Reagan Presidential Library. I’m such a nerd about those types of things. I was so excited and it fulfilled everything I thought it was going to be.

When we first got there, there was a guy who was carving in the wall.
He was a professional stone carver and as we walked throughout the whole library, you could see that he carved everything in the library. Stone carving is such an underrated art form.

When I bought my ticket, I got a sticker. This may not be exciting to many, but I love stickers so much. It’s now stuck to my laptop and I am very happy.

Anyways, when you first walk into the museum, there is a huge quote from Ronald, and then you walk down the hall and there is a to scale statue of Ronald and Nancy. Insert picture of me here. As you walk through the library, you just go through Ronald’s life. His family heritage, his high school life, college life, and when he started his dreams of becoming an actor. You walk through his journey on radio and his love for Nancy – which, by the way, is one incredible love. Fun fact: Ronald wrote over 720 love letters to Nancy in his life. Even after years of marriage, he wrote her endless love letters. I want that love.

There are so many different exhibits to just walk through his life. There is one that is dedicated to his attempted assassination, one to his campaign with Bush, one solely dedicated to Nancy with a bunch of her clothes and things.

The way that I thought about it was like walking through his biography. You learned about who he was as a person, as a politician, and as a husband. They had his clothes and his letters, his quote book, some of his china from the White House, anything you could think of. It was so incredible to see his life and his love.

I think it was just really eye opening. It’s easy, as people and as a nation, to 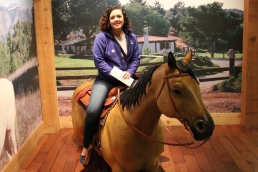 forget that presidents are actually people, with real lives and emotions. You are
quite literally walking through his life with his belongings and his feelings, letters, diaries, clothing, costumes, speeches, scripts, suits. I wasn’t alive – obviously – during his presidency, so I was very intrigued at the
type of person he was.

Anyone who knows me, also knows that when we were in San Diego last year, we visited the USS Midway and that meant a lot to me and I thought it was such a cool experience. So seeing Air Force One, another huge part of the library, was awesome. I’ve fallen in love with aircrafts a little from my visits. Where the airplane is in the library, is also very cool. (I feel like I use pretty generic words, but I don’t know what else to say other than how fricking awesome it is). There

is a mural on the wall that is called The History of the Flying White House and it has paintings of all the past airplanes. Going on the actual Aircraft is something I think everyone should try to do. There are workers that stand on the plane and give you a little insight, as well as props and mannequin to give you a real feel of how the plane functioned. Fun fact: the first time the plane ever took off, it was someones birthday and there wasn’t a cake. After that, Reagan made it a point to know every birthday, anniversary, or event worth celebrating and there was always a cake on board to celebrate with. He always presented it himself, too.

Before we left, of course we had to take a selfie with our new best friends Ronnie and Nancy. 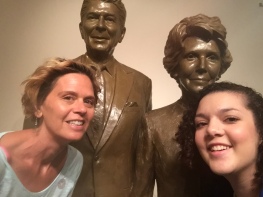 After we got home from the library, I had some amazing Belgian waffles. A little later we all played Ticket to Ride. Lemme tell ya, I hate that game when it’s with more than 2 people because it’s so much harder to win. Scott won by a lot and I was upset but also happy that at least it wasn’t Elijah because he’s won every game that we have played.

When we were done playing, I finished up the movie Vacation and off to bed I went. I had to get up early for my exciting day 5!